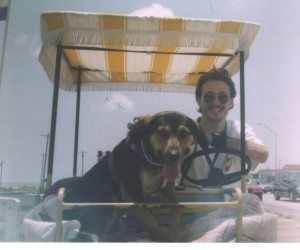 Likes: Rubbing his face in the grass, riding in cars, home cooked meals and treats, hogging the covers, napping in recliners, sniffing his sister cat as she rubs on his legs, massages, tall weeds, and eating clumps of mowed grass.

Dislikes: small dogs, the ocean, bugs flying around his face, computers (why do humans use them so much?), loud noises, thunderstorms, honking horns, and medicine.

Grandbury came into our lives on Father’s Day 1995. The hubster and I were newlyweds, having been married for a mere three months. We had one furry kid already, our girl Marzo, a silver-footed ferret.

Father’s Day gave us an excuse to dress up, go to brunch, and take a leisurely drive to check out the store where Loren had worked for several months installing the electrical wiring. The store wasn’t yet open, but we wanted to see the exterior changes they had made and the newly installed landscaping.

The long ride and a full bladder prompted the need for a restroom search. The nearest option was across the street, at a laundry mat. We weren’t sure if they were restroom equipped, but we headed over just in case.

My full bladder was quickly forgotten as I was soon greeted by the cutest postcard image come to life: a small Hispanic boy petting a beautiful black and tan dog who seemed to grin as he panted and thumped his tail against the concrete. The boy smiled widely, and the dog, rolling over onto his side while raising his back leg to expose his tummy, nearly knocked over the Bubble-Yum bucket filled with clean water.

I leaned down to pet the belly of the pup and told the boy he had a beautiful dog. He replied, “He isn’t mine. I just got him some water. He was hot.”

Loren and I walked across to the building the boy had pointed out and quickly discovered it was a veterinary clinic. They were closed, but there was a note on the door from the local animal control stating that he had finally picked up the stray he had been attempting to capture and had put him “in the back” of the building.

Loren went around the back and found a covered area that housed a couple of horses and two very unhappy dogs. It appeared that the “elusive dog” had been tied up to a post near the pair of barking dogs and had slipped out of the rope.

Loren called the number on the door and spoke with an answering service that didn’t seem too concerned about the dog. Yes, they were aware that animal control frequently left animals in the back of the clinic. No, they weren’t going to alert the vet or send someone out to come get the dog.

Loren asked what we should do and the person said that we could tie the dog up or take him home, they “really don’t care, it is a stray.”

Loren informed them that he wasn’t comfortable tying the dog up with the rope and pointed out the dog would have no water or food access, much less have a difficult time with the animals that were currently housed there. The answering service suggested that Loren take the dog or just ignore it and animal control or the veterinarian would deal with “the issue” if and when it was still there on Monday.

Meanwhile, as Loren was busy making phone calls, I was falling in love with the stray dog that wouldn’t allow himself to be captured. A crowd of people who were at the laundrymat to actually clean their clothes started to descend on me. They pointed out that this dog had come from “nowhere” and he appeared to be really sweet. They commented they thought it was nice that we were attempting to help the dog out but, “why don’t you take him with you? He looks like he could use a good family.”

It was true, he was skinny, and he was covered in ticks and fleas. Loren was amazed that no one at the answering service felt this situation warranted sending someone out and was angry that they were all too happy to wash their hands of the dog.

“No, we can’t take him. We live in an apartment that doesn’t allow dogs, ” he informed the crowd.

Different voices rambled together to create a succinct sentence, “Oh, but look, your wife likes him. He likes her. You should take him, he is a good boy.”

“We can’t leave him here, honey,” I said. I continued petting the soft belly fur of the dog who kept rewarding me with licks and tail thumps.

So, with much consternation and promises that we would indeed call the local animal shelters and rescues the next morning, we walked the uncatchable dog to our VW Rabbit truck, slid open the side camper top screened windows, and placed the smiling dog in the bed of our truck. He laid down and thumped his tail.

The patrons of the laundry mat waved good-bye to us. After a quick stop for a leash, food, and some grooming products, we brought the wayward pooch home with us.

Loren was up bright and early the next day furiously calling every animal shelter or rescue organization he could find. As I dozed in and out of sleep I heard his frustrated pleas, “You don’t understand, I would keep him if we could, but our apartment doesn’t allow pets. We will get kicked out of here and then what good will that do any of us?”

Call after call he was told that the shelter either didn’t have room for another dog or since the dog was picked up in a different county, the shelter wouldn’t accept him. My calm, peaceful husband had turned a deep shade of burgundy and was officially being to fray at all seams.

“I think we should keep him,” I said, ignoring his unwinding.
“We can’t, we just can’t. If the apartment finds out we have this dog….” He trailed off, throwing the phone book to the floor, startling the dog.

“Well, we’ll work around it. We are moving to Illinois in less than a month. In less than 30 days we’ll be out of the apartment. We can handle this for 30 days, right?”

Loren looked at the dog. The dog sat on the floor, looking straight into Loren’s eyes, as if waiting to hear the outcome of his fate. Loren motioned for him to come to him and with that wagging tail and beaming smile, Grandbury was ours and we were his.

Q: Why was he named Grandbury?
A: We found him in Granbury, Texas and well, we thought he needed a “d” in his name to stress just how Grand he is.

We thought we’d made it. We only had to get through a month with the dog in the apartment and then be on our way, no harm, no foul. Until one day I get a call at work from an extremely panicked husband.

This site uses Akismet to reduce spam. Learn how your comment data is processed.

Some cats, like Winni, don't like to eat dry food while traveling. Some cats, like Winni, don't like to drink water while traveling. These two dislikes can turn into a problem fast. To avoid your cat becoming dehydrated or ill, pack some canned or wet packaged food for your cat. Don't by shy about adding some more water to the food as they eat it, Winni lapped it right up.

Feeding the Dog on a Trip

Our guys never lost their appetite on trips, far from it. The excitement and fun of the trip seems to make them want to eat more. Be careful not to introduce new foods while traveling with your dog. Your palette should be the only adventurous one while on vacation. Stay with the tried and true until you get home, your dog (and your car interior) will thank you for it.